We live at a time of a general crisis which affects all aspects of human life.

The project of building a new world without consideration for human beings, and using the practice of violence as a methodology of action, has brought humanity to the edge of catastrophe. 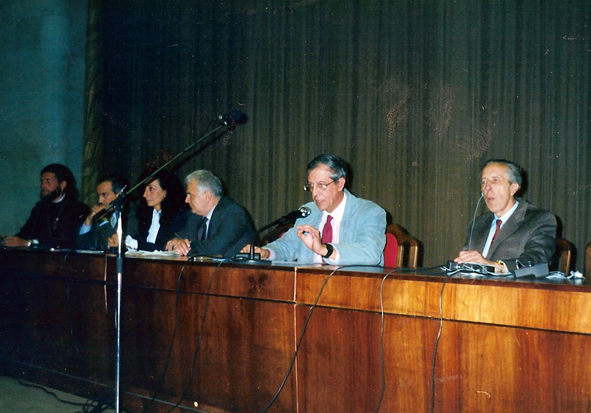 The self-interest and the mediocre policies of groups with a narrow vision, together with the ignorance to which large groups of the population are subjected aggravate the proportions of the crisis, while hunger and malnutrition oppress millions of human beings.

Unemployment creates massive damage, even in the most developed countries, while often bloody conflicts of religious or ethnic character engulf new regions generalising suffering and malaise.

Discrimination is on the increase affecting mainly the weakest sectors of society; ethnic and cultural minorities are affected, often with a threat to their survival.

Advances in science and technology make the solution to these problems possible, but for that to happen, it is necessary that the thinking, the intentions and actions of solidarity of all human beings are set in motion in this direction from all corners of the world.

It is not enough to list the perils that threaten humanity and to report about them through the mass media.  The time has come to undertake urgent, concrete actions founded in solidarity with the purpose of protecting life, securing the safety and prosperity of our generation and the generations to come, building up a united and diverse world and affirming the identity of each nation, creed and human group.

It is necessary to guarantee the freedom of the individual in the face of oppression and discrimination, liberating their creative capacities in the face of dehumanisation.  It is necessary to widen the framework of democracy overcoming its predominantly formal character, transforming democracy into a means of expression and a guarantee of rights for all.

We must widen the practice of representation, promoting the direct election of people’s representatives, plebiscites, and other forms of popular consultation.

Voters must have the right to revoke the mandates given to their representatives, if they lose confidence in them, or if they do not fulfil their electoral commitments.

We aspire to create social, economic, political and cultural expressions which can guarantee the unfolding of the capacities and potential of all peoples.

It is necessary to join the efforts of labour and capital, to achieve together the highest productivity based on joint action and management.

We aspire to transform the spontaneous actions of protest into conscious programmes of action in all spheres of life.  We do not expect to impose our principles and intentions, our objective is to give cohesion to all the different groups with the common denominator of a humanist orientation, joining forces and intentions in the endeavour to affirm human dignity.

We are convinced that the work developed by the Congress has contributed to the exchange of experiences in the direction of the objectives mentioned above and that this will help to achieve positive agreement and collaboration with other organisations of democratic and humanist inspiration.

Unfortunately, the work of the Congress coincides with tragic days for the people of Moscow, Russia, the former Soviet republics and the world in general.  We support the reform efforts of the people of this country with confidence in that this process will lead to a positive and coherent situation for the people of Russia.

The events experienced in Moscow, reaffirm to us even more our humanist principles and the rejection of violence as a means of social transformation.